Pseudanthias hangapikois commonly referred to as Rapa Nui Fairy Basslet. Difficulty in the aquarium: There are no reports available yet that this animal has already been kept in captivity successfully. Toxicity: Toxic hazard unknown. 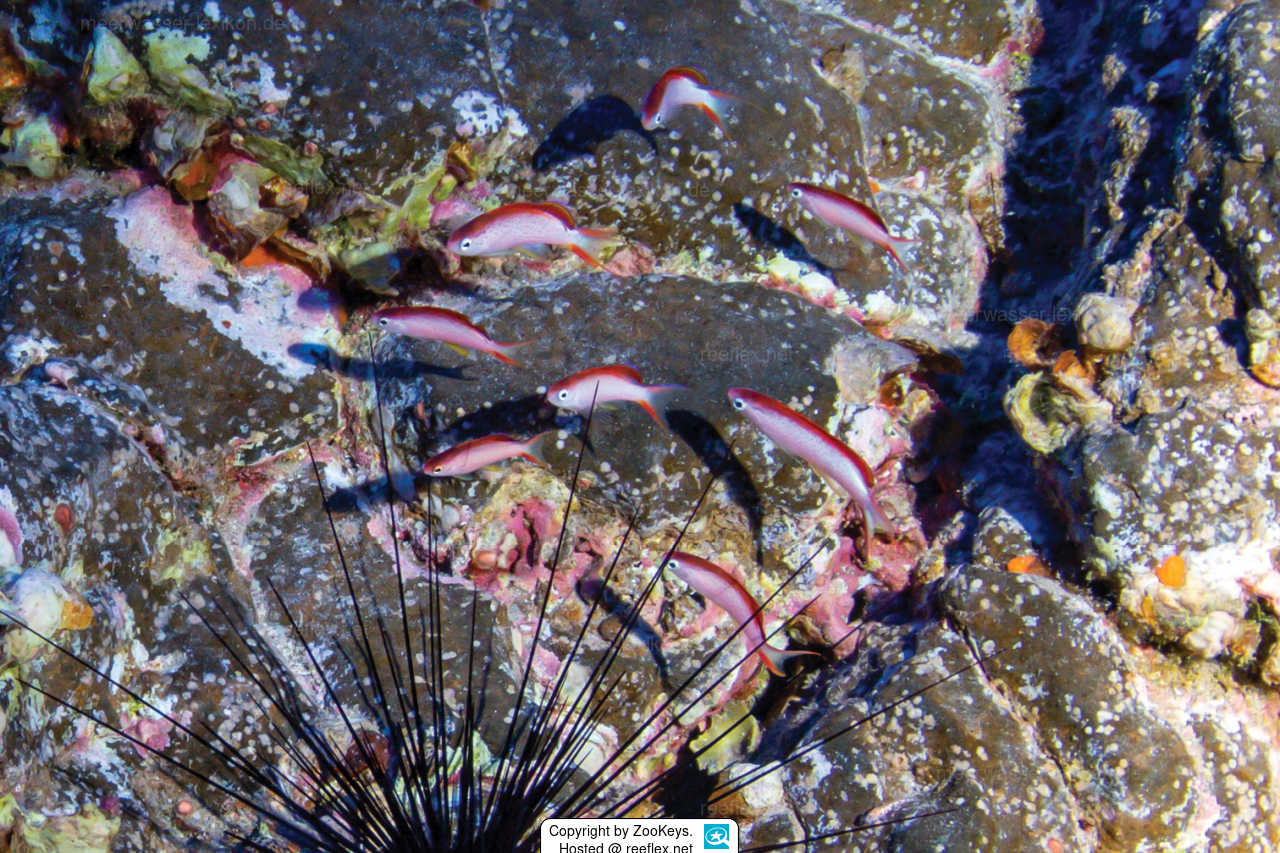 Sea depth:
- 83 Meter
Size:
2,81 cm - 4,52 cm
Temperature:
°C - 24°C
Difficulty:
There are no reports available yet that this animal has already been kept in captivity successfully
Offspring:
Not available as offspring

Etymology:
The species is named for the location where it was collected, Hanga Piko, meaning “hidden bay” in the Rapa Nui language.

The new species is currently known only from Rapa Nui. The holotype and paratypes were collected at a depth of 83 m at a small, rocky patch reef surrounded by a large sandy area.
Due to geographical isolation and the high degree of endemism (21.7%) among the shore fishes of Rapa Nui (Delrieu-Trottin et al. 2019), it is likely that Pseudanthias hangapiko is endemic to the island.

Males:
The body of males is pinkish with yellow and dark red hiding most of the ground color, except on the belly and throat.
Rows of metallic magenta spots, about one per scale, cover the body, forming an irregular pattern of spots beginning behind the orbit and extending to the base of the caudal fin.
The upper third of the body is dark red, the sides yellow.
The dorsal fin is dark red, with a thin yellow stripe along the upper margin, the posterior half of the soft dorsal fin base of less distinct color extending about one-fourth the height of the dorsal fin.

Females:
The body of females is predominantly pink with less pronounced red and yellow markings, silvery pink on the operculum, throat, and abdomen.

The spotted pattern of metallic magenta scales is distributed at a greater distance than in males, the anterior dorsal third of the head is dark red, pale silvery pink below.
A faint orange can be seen on the tip of the snout and lower jaw.
The dorsal fin is red with a thin yellow stripe along the upper margin, on the posterior half of the soft dorsal fin base.
On the upper margin of the dorsal fin, the dark gray area is more pronounced than in males, encompassing the rearmost ten to twelve fin rays.
The pectoral fins are hyaline, and the pelvic and anal fins are also hyaline with faint yellow markings on the anterior margin.

The eyes are silvery, darker on the outer margin.

0 husbandary tips from our users available
Show all and discuss